In the article below we’ll take a look at the new lineup of high-speed two-wheelers coming out of the Ukraine. We’ll cover some of the similarities between Vector and Stealth products, as well as what makes them different.

Billed as an electric motocrosser, the Vortex is the biggest and burliest of Vector’s lineup. Fast, tough, and stylish, this pedal-free powerhouse is built to compete against bikes like the Stealth H-52 and Sur Ron X.

Unlike other Vector models, the Vortex utilizes a central drive motor, which is linked to a motorcycle-style chain and sprocket final drive. Vector claims this dramatically lowers the Vortex’s center of gravity, improving handling and balance offroad.

Its battery is built from 300 individual Panasonic 18650 power cells, making it the largest and most powerful configuration in the Vector lineup. Combined with the Custom Kelly 300-amp controller, it packs a 3.8 kWh capacity, 10kW peak power, and claimed two-hour recharge time.

There are three sprocket options available for the Vector Vortex, which offer either maximum top speed, maximum torque, or a happy medium between the two.

The Vortex’s tube steel frame and matching rear swingarm are about as stylish as they come, and are strong enough for passenger duty.

Motorcycle-style rims measure 19” up front and 17” in the rear, which gives riders a wide variety of DOT and offroad-only tires to choose from.

The Vortex uses familiar suspension components from DNM with their 200mm USD8 fork up front and Burner 220mm shock out back.

The brakes are sourced from Tektro in the form of their Auriga 4 piston hydraulic calipers front and rear, both biting down on 203mm rotors.

Mountainbike pedals are utilized as footpegs, but are mounted directly to the frame in one of four positions, allowing for customizable ergonomics depending on rider height.

While the performance of the battery is constant across all three drivetrain options, your sprocket of choice will decide how your Vortex behaves.

Throw the smallest sprocket on the rear wheel and you’ve got a top speed of over 50mph.

Opt for the largest sprocket and you’ll lose a little top end, but net lightning-fast acceleration with a claimed 0-60-km/h of just 3.2 seconds.

Range-wise Vector claims the Vortex can run for 120 miles or more in eco mode on a single charge.

Mistaking the Vector Typhoon for Stealth’s firebreathing B-52 eBike is easy to do.

Everything from the frame to the swingarm to the suspension components looks… almost identical.

That is, until you take a look at the spec sheet.

Honestly: We have no idea.

But we’re looking forward to throwing a leg over the Typhoon to see if it can actually cash the check Vector eBikes has written. Until then, let’s dig into the details:

The Vector Typhoon shares its hub-mounted motor with the Typhoon-Light and Storm models, and also shares the same regenerative braking and optional pedal-assist function to further extend the range of the bike.

Speaking of the battery, you’ll find the same massive 300-cell unit from the Vortex on the Typhoon, which packs the same 10,000-watt peak power output and 3.8kWh capacity.

High-torque is ideal for technical off-road situations or steep inclines, while the high-speed setting lowers torque to raise RPMs, which is ideal for traveling to and from the trail.

The powder-coated frame and swingarm are both built from high-tensile steel, which Vector claims to test with both a 9kN load on the seat mount and a 10kN twisting force at the head tube. Customers seem to agree the frame can handle everything from trail riding to dirt jumping.

Aside from the frame and swingarm, most of the chassis components on the Typhoon are carried over from the Vortex.

The same DNM suspension components are found both front and rear, although Vector lists the DNM burner shock on their Typhoon as benefitting from an increased 240mm travel.

Brakes are the same as well, with Tektro Auriga calipers and 203mm rotors specced front and rear.

The Typhoon does set itself apart in the weight department though, shaving a full 10kg from the Vortex motocrosser to tip the scales at just 59kg.

Top speed and range figures are shared with the Vortex as well, with a 50mph+ capability and claimed 120-mile range in eco-mode.

Recharge time is advertised as 150 minutes, which is 30 minutes longer than the Vortex although the battery and 300 amp Kelly controller appear identical.

Vector eBikes has also released a light version of their Typhoon model, which is identical to the original Typhoon with the exception of a smaller battery.

Peak performance is still 10,000 watts, but capacity is reduced to around 2kWh. This limits the Typhoon Light to around a 40-mile range on asphalt, or about 20 miles off-road at full-send.

In addition to dropping 13 pounds from the total weight of the bike, the smaller battery also frees up additional space inside the frame. This allowed Vector to move the controller unit inside the main triangle, and also allows customers to swap out batteries on the fly much easier.

Vector eBikes will sell you an additional battery with your Typhoon light for an extra $200, so customers who like to keep multiple batteries at home base for extended trail rides might actually prefer the light model.

The Typhoon Light also happens to be $500 cheaper, so even with the extra battery you’d still be spending less money and getting more total range than the original Typhoon if you don’t mind swapping them out. 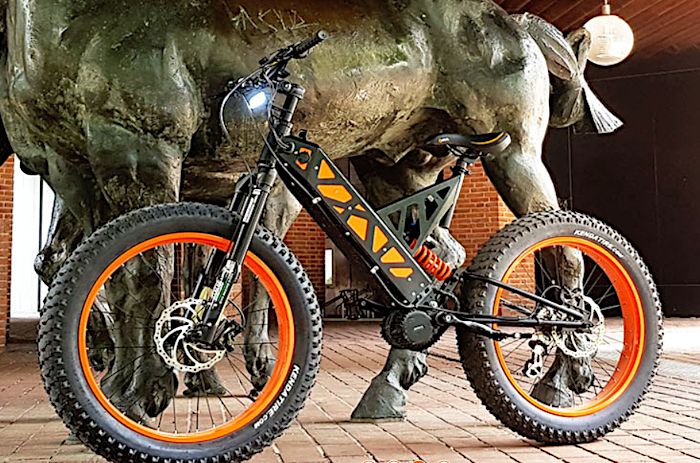 As the lightest model in Vector eBikes’ stable, the Storm is a part-time commuter ready to handle some trail duty as needed.

Stealth bike fans will no doubt draw parallels to the P37, but the Storm actually has a few standout features that make it unique.

Most notable is the choice between a hub or a mid-drive motor for your build. Vector recommends the hub-drive option for offroad duty and climbing hills, while the mid-drive delivers higher speeds but less torque, making it ideal for commuting.

The second obvious difference at a glance is the Storm’s swingarm, which is built from welded steel tubing rather than the motocross-style arm found on the P37.

Battery-wise the Vector eBikes Storm utilizes a 1kWh capacity unit, which is built from the same Panasonic 18650 power cells as the Vortex, but limits the cell count to 100.

Both the mid-drive and hub-drive versions include pedal-driven secondary drivetrains, which utilize Shimano cassettes and derailleurs to maximize pedaling efficiency.

If you opt for the hub-mounted motor, regenerative braking is also available, and can be adjusted or turned off completely for minimal interference.

High-tensile steel is used for the entire frame of the Storm, which Vector states is both FEM analyzed and stress-tested at their Munich facility.

The Storm shares the same DNM components as Vector’s other models, but the front fork is tuned down to 180mm of travel.

Wide 24” wheels are equipped front and rear. These are double-wall aluminum units, essentially a fat-tire mountain bike style wheel rather than the motorcycle-type wheels available on other models.

Peak power output is rated at 3000 watts, delivering a 30 mph top speed and about 60 miles of range on a full charge.

That range is extended further if you choose to pedal the bike rather than simply twist the throttle, although Vector doesn’t provide any extended range figures for the Storm.

Either way, Vector claims the Storm can be fully recharged in two hours or less from a standard wall outlet, which is ideal for extended commutes or long days on the trail.

Although the spec sheets for each of the Vector models look promising, ultimately the performance of each model is fairly untested.

We haven’t seen enough third-party feedback for Vector products to get a clear picture of the build quality and reliability of these machines, but we’ve reached out to Vector to see if they’re ready to provide test bikes in the states yet.

If you’re anything like us, you’re hoping these brawny two-wheelers are as good in the dirt as they are on paper. Guess we’ll just have to wait and see…